All Collections
Salesflare
What do the insights mean?

What do the insights mean?

How are the insights calculated?

Written by Keri Byrne
Updated over a week ago

Looking for help customizing your dashboards and reports? Go here.

The insights dashboard has 2 tabs in the top left: Revenue and Team.

What are the revenue insights?

The total value of your won opportunities.

The average days until you close a deal.

That’s the amount of days from the date you create the opportunity to the date that you drag it to won.

The red or green arrow & number is the increase or decrease from the period prior.

You can change the period using the filters in the top right of the page.

The average value of a won deal.

This is calculated by taking your revenue divided by # won opportunities

The % change is relative to last period.

The amount of opportunities you've won this period. The number beside the won opportunities is the change in the number of won deals vs. last period.

If you're looking at a month and it's green, it means you've won more deals than last month. Keep up the good work. 👊

The amount of new opportunities created in this period.

A good way to tell if you have more or less leads coming in than last period. 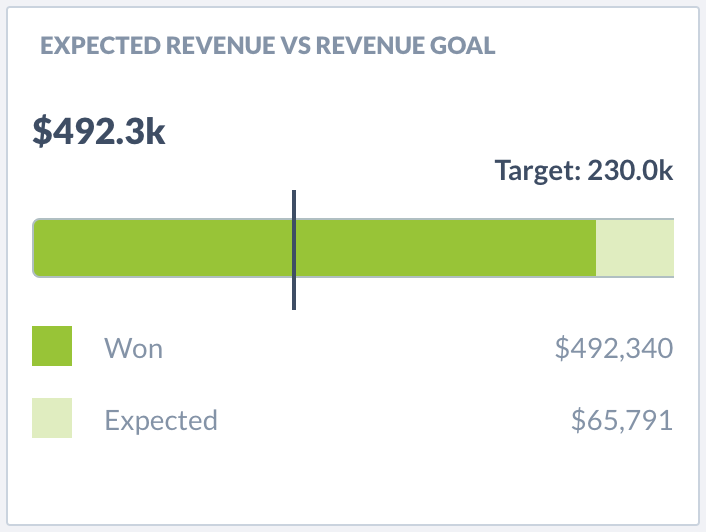 The top left number in black is the won revenue - it’s what you already sold.

You can see in this example, the team sold more than the target for this year.

Throughout the period, it's important to have higher expected revenue than the target.

How can you do this?
By filling the pipeline with lots of good deals.

Expected revenue is calculated by:
Taking the value in each stage times the probability that an opportunity in that stage makes it to won. Then all of the stages are added together. 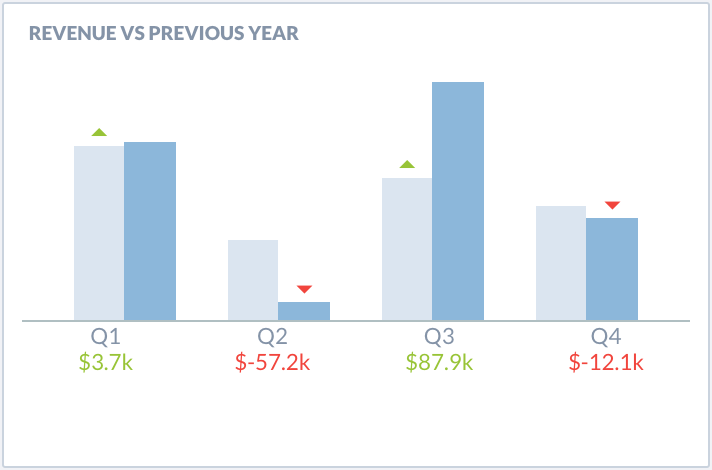 This graph shows you the changes based on period.

It splits it up in the period based on what you've filtered your insights on in the top right.

For example, if you've filtered by year, it splits the graph up into quarters.

This way, you always have an idea of how you did in different parts of the period.

For example, this team sold a lot in Q1 but not as much in Q2, and more in Q3 again.

The light blue bars represent last period.
This gives you a quick visual of how you're doing this period compared to last.

The green arrow indicates you did better this period relative to last.

The revenue number listed below the bar is the change in revenue (green if higher or red if lower).

When you hover over the bars in the graph it shows you the start and end of that period and the amount of revenue you made. 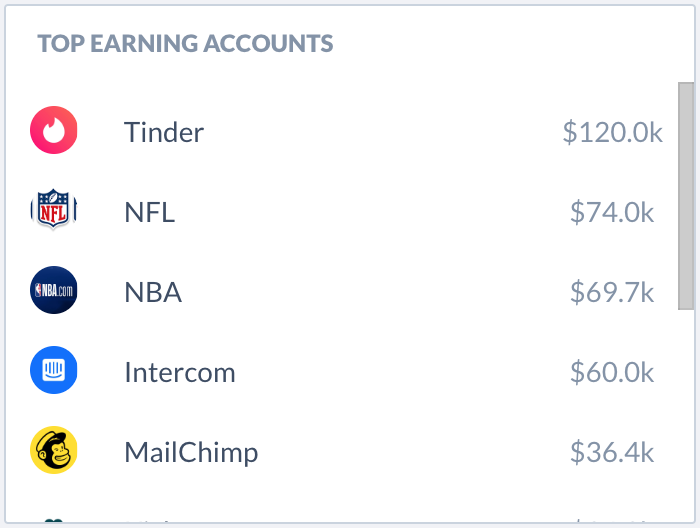 The total sum of all won opportunities per account.

Accounts are sorted in descending order. 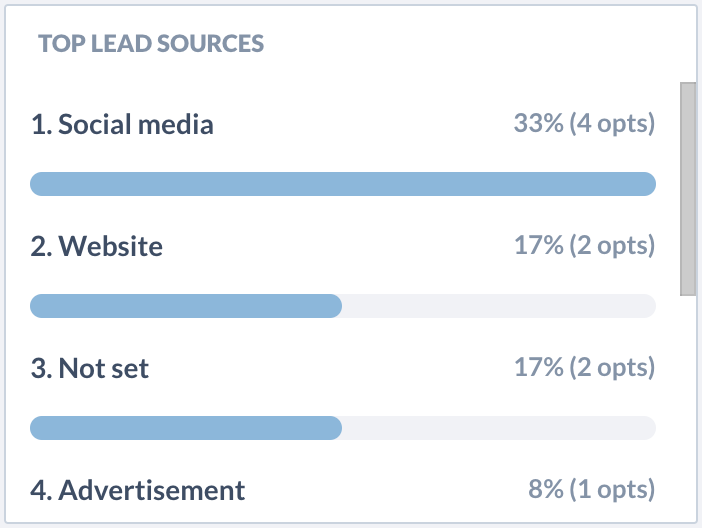 Don't see top lead sources in your insights yet? Learn how to enable lead source here. 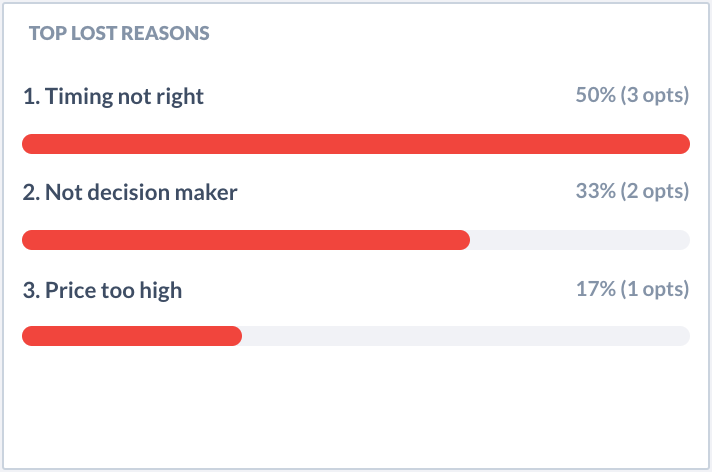 The top lost reasons show the most common reasons why you've lost an opportunity. Learn how to qualify your leads better with this graph.

The most common lost reasons per pipeline appear at the top. 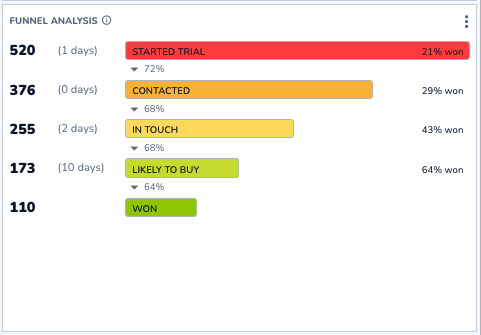 The funnel analysis gives you an idea of how your opportunities are moving across the pipeline.

In the leftmost column, the black numbers in bold show how many of the closed opportunities moved through the stage.

In the next column, the gray text between brackets is the average duration that opportunities remained in the stage. This shows how the time between creating the opportunity and winning it is distributed among the different stages of your sales process.

The last column shows the stage name, together with some more information.

What are the team insights?

The one with the most wins.

Most sold by rep 🏅

The sales rep with the most won opportunities.

The average amount of tracked emails.

The average number of calls.

The average amount of meetings held. 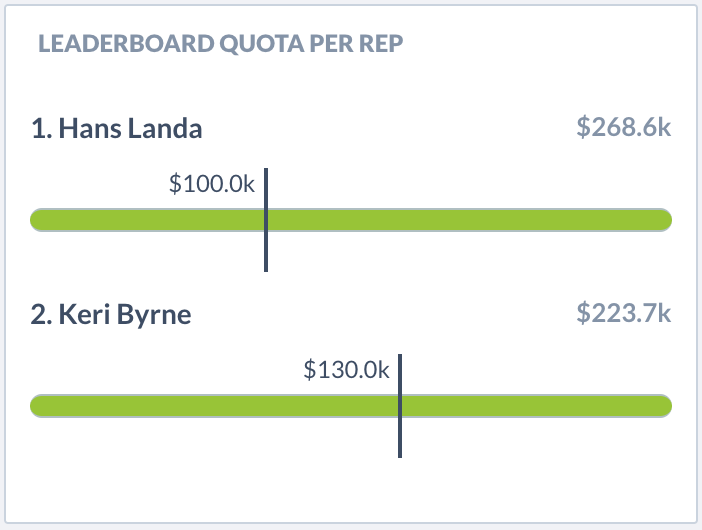 Every rep gets a certain quota (or target) and this graph shows how the rep is performing versus quota.

Set quotas in Settings > Set targets. You can set targets per pipeline and per year.

The black line represents the target set for that sales rep.

If the bar is red, it means that sales rep has not reached their target yet.

The grey number on the right is the total value that sales rep has sold in the period. 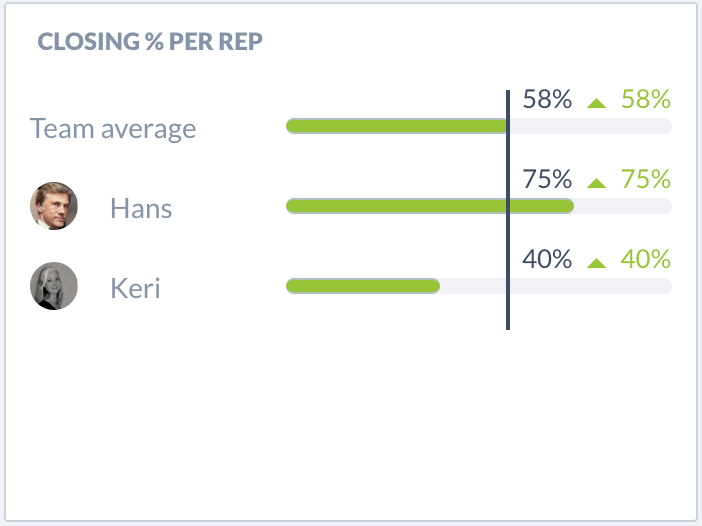 Out of the opportunities a sales rep makes, how many do they close.

The black line is the team average. 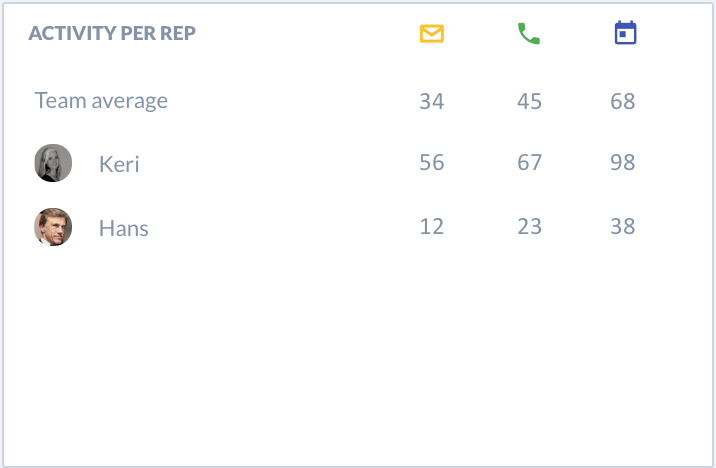 This tells you the number of tracked emails sent, phone calls made and meetings held per sales rep.

Keep track of your sales reps' activities here by filtering different periods at the top.

Accounts are listed here when an opportunity has been created that is not in the won or lost stage yet and you have not interacted with them.

The time period in gray represents how long it's been since you've interacted with the account.

Follow up on these opportunities to close more deals. 💪 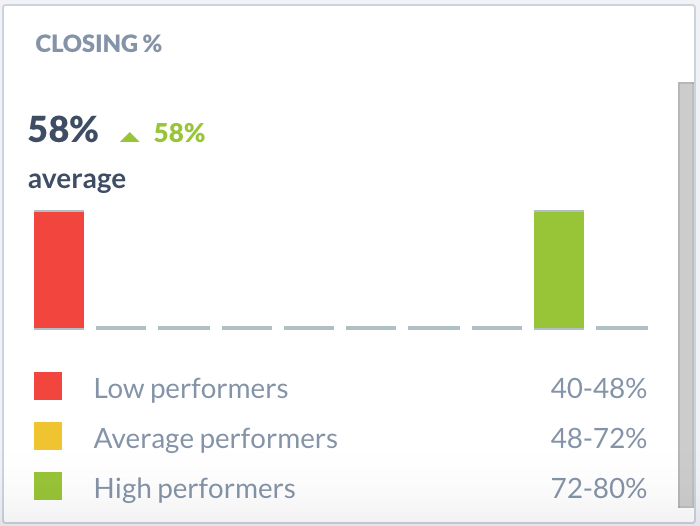 The Closing % shows the distribution of where team members are in terms of closing %.

The black % number is the team's average closing percentage.

When you hover over the bars it tells you how many reps are closing in this range.

This graph is based on opportunity owner.

Any questions? Ping us on the chat! 💬

Did this answer your question?